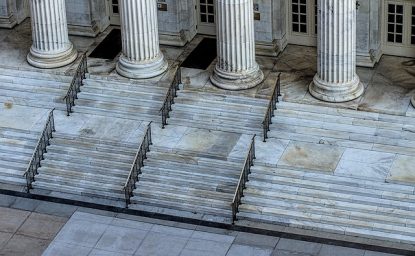 Aguayo v. Amaro and the Justice of Equitable Relief

The Amaro case (officially cited as 213 Cal.App.4th 1102) would have been an interesting read for me even if I had not been involved in it. The reason for that is my fondness for equitable remedies and relief. When a judge sits as a chancellor in equity, he or she is enabled to fashion remedies that are beyond mere application of black letter statutory or case law. The court is free to exercise its conscience and judgment by applying defined guidelines as set forth in the various equitable maxims.

Michelle Amaro came to me some time in 2010 with an unusual problem. She was the special administrator of her deceased grandmother, Isabel Infante’s estate. She had become appointed by the probate court in Los Angeles as such to defend a “quiet title” action brought by a couple named Sofia and Jesus Aguayo. The Aguayos were in the business of acquiring title to mostly residential real properties by “adverse possession”. Acquiring title in this manner developed in Anglo-American law to make productive property that has been abandoned or ignored by its owner of legal record. If you satisfy the required elements of Adverse Possession, you can claim ownership from the legal owner by “adverse possession”. Those elements, briefly, are:

Without going into the arcane facts and details of each element, the Aguayos had an argument that they had satisfied all of the legal elements with the Infante property, as well as literally dozens of others in Southern California through their professional business. The problem they encountered were with people like Michelle Amaro and various other rightful owners who were aggrieved by the Aguayo’s methods. These methods also caught the attention of state and local prosecutors, who filed both civil and criminal actions for 22 counts of forgery, theft, trespass, burglary.

At about the same time the criminal action was being successfully prosecuted, Michelle went to trial with her former counsel in the quiet title case in which she had cross-complained as estate Administrator for quiet title as against the Aguayos. While the Aguayos admittedly had performed the required technical elements for title by adverse possession, Michelle raised the equitable defense of “unclean hands”, which essentially means that you must come into a court of equity with lawful intent and good faith in your claim.

The trial judge heard the case and decided that, indeed, the Aguayos did not present a good and valid claim in good faith. They, in effect, had “unclean hands”. The judge was no doubt aware of the Aguayos’ notoriety, as their adventure in adverse possession had been the subject of articles in the Los Angeles Times. The principle fact that negated their claim was the manner in which they paid the taxes, (No. 5 above). Jesus Aguayo had recorded a “wild” or “rogue” (out of chain of record title) deed naming a from a fictitious”Jesus Duran” to Jesus and Sofia Aguayo. While that phony deed, of course, did not give them good title, it resulted in the L.A. County property tax bills being sent to them and not to the owners or occupants of the property. The Aguayos then were able to pay the taxes, and fulfill that element, unmolested by any of the heirs of Isabel Infante, who had not received any bills or notices from the County. Troubled by this deceitful act, the Court sustained the “unclean hands” equitable defense.

While the Court ruled on this case in 2006, judgment was not entered in the record until I became involved in 2010. Both Michelle’s prior counsel and the Attorney General’s office were hesitant to have judgment entered in her case because they were concerned that the judge’s decision would be reversed on appeal, which would negatively impact the prosecution’s case against them. However, Michelle and the probate court were anxious to move the Isabel Infante probate estate forward. Probate courts want to see estate administrations finished within a year or so, and this one had been in suspension for 4 years, while the parties awaited conclusion of the state’s case.

In any event, I saw my client’s best interests lie in having the judgment entered, and I made a motion to have that done before the same trial judge. My motion was actually opposed by the Attorney General’s office. The judge was not swayed by their concerns about his decision being reversed, and granted the motion. True to prophecy, the Aguayos appealed. The briefs were filed and at oral argument, the justices were just as convinced as the trial judge, if not more, that the Aguayos’ claim was defeated by the unclean hands defense. At the time the appeal was heard, the Aguayos had been convicted on several of the criminal counts, and were, in noticed fact, in jail.

The case is noteworthy and was certified for publication, because, until this decision, equitable defenses to adverse possession claims were rarely asserted or sustained. It is rare for a sole practitioner in the suburbs to represent parties in a published opinion, and I am pleased to have participated therein. An ironic outcome is that when the Attorney General’s office that had opposed my motion to enter the Aguayo v. Amaro judgment in 2010, cited this case in their subsequent papers in their civil case.

I have always been attracted to equitable principles that, when applied, can achieve justice where mechanical application of case or statutory law does not afford a remedy. In probate and trust cases, these principles are in frequent play. Unclean hands, promissory or equitable estoppel, resulting or constructive trusts, are just some of the principled ideals and methods to make judgments fair and just. I hope to make some of these remedies and maxims the subject of future blogs.