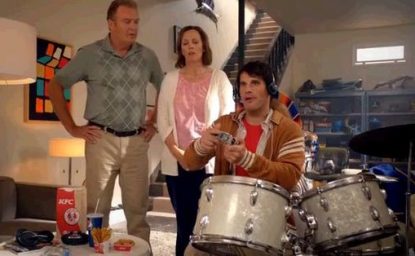 As we get older, it is, naturally, a great comfort to be close enough to our children and family to visit frequently and keep in contact. Some adult children take that desire for familiarity to the extent of moving back in with Mom and/or Dad on a full time basis, sometimes with their own children in residence, sometimes only by themselves, to reclaim and sometimes relive, their childhood room and routines. These decisions to reunite with the family home are sometimes precipitated by a marital or financial breakdown on the part of the adult child. Many are refugees from the demands and responsibilities of American life. Sometimes it is caused by parental disability or need, with a family member volunteering to provide low cost care for the disabled and sometimes demented parent(s). Or, it is a combination of all of the above.

It is unusual for the parents who find themselves in this scenario to object. In fact, most seem to appreciate the companionship and care that comes from having their kids and/or grandkids around. And it keeps them from watching the idiot box all day if they don’t have any outside activities to keep them busy. However, many times these situations develop into controversy, either at the outset, after a prolonged period of time, or, even more commonly, after the parent has died, or otherwise left the domicile, leaving the dependent adult child still in residence.

In families where there are only one child or heir, and he or she is now the solo resident and claimant to the family manse and estate, there is no problem, assuming that child has the ability to maintain the home or financially sustain themselves, now that their benefactor parent, and their income, has moved on. However, in most families, the only child situation is not the case.

All too often, particularly in California, where housing consumes a big chunk of most incomes, the prospect of living rent free is alluring. In past generations, it was somewhat of a social stigma when one was not able to get free of the nest after the age of majority, if not sooner. Living under the parental roof no longer appears to be a motivation to assume adult responsibilities. Indeed, being able to have the old folks foot the housing, food, and laundry bills is apparently looked on with favor or even envy, and not just by younger adults. Children of middle years and beyond are often ensconced for decades in the family residence. Usually, unless there is flagrant elder financial or physical abuse observed by other family members by the adult dependent child, the other, usual more successful children, in their capacities as contingent estate beneficiaries, are content with the status quo. They are usually even willing to overlook the occasional petty theft and undeserved benefits realized by the in-residence sibling. After all, if brother Joe wasn’t there helping himself to Mom or Dad’s generosity, the job of watching them deteriorate on a daily basis may fall on the mostly absent complaining party.

The stuff really hits the fan when its time to divvy up what is there after the parental units have departed. In most middle class families, the bulk item of estate wealth is represented by the family residence. This real estate becomes the bone of contention as the resident child is now viewed as a deadbeat user, at best, and this fondness is returned by the home bound child staking a superior claim to the house on the basis of their years of selfless parental caregiving, and the lack of gratitude on the part of the others. In some extreme cases, court orders of eviction and partition are necessary to break the deadlock. In other cases, there are sad proofs of financial abuse and undue influence offered to show that the in-house volunteer custodian helped themselves to an unconscionable piece of an unaware or vulnerable parent’s money and other stuff. Whatever gratitude there was before, for the companionship and services that were actually rendered, vanishes in a puff of courtroom evidence. No consideration is paid for what it would have cost for assisted living or skilled nursing facilities if brother Joe had not been there, or to the point that almost any elderly parent will pay whatever it costs to stay at home, and out of such facilities.

This is not offered as a defense for the rights of adult children to squat in the family home and continue to reside there as if they were still juvenile dependents. It is offered to make the case that there are always, or at least usually, two or three sides to this all too common story. The best way to avoid this conflict and controversy is to put the arrangement in writing. Of course, that writing is best drafted by an attorney familiar with family agreements, but any clear writing is better than none, which is usually the case. If a child moves in to be a compensated caregiver, put it in writing. If they move in as a tenant, put the terms in writing. There can even be provisions made for further rights to occupy in the family residence put in wills and trusts, as are often provided for spouses. At every point where there is a potential for controversy and conflict, intentions and responsibilities are best spelled out. Hoping that it all settles without a battle royal, post mortem, is not a realistic expectation in these litigious times.