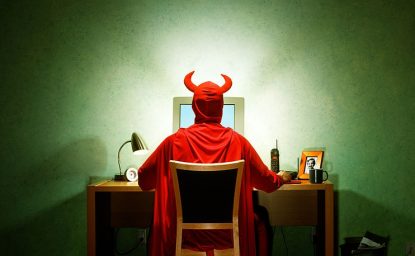 To Yelp, Shame, Blame, or Defame

I think most Americans believe in freedom of speech along with freedom of the press. My strict constructionist view is that such constitutional guarantees are virtually unlimited and should be righteously defended. Freedom of expression is not nearly as controversial as the right of individuals acting as their own regulated militias to bear and carry military hardware. Having said that, the right to say whatever is on your mind does have limitations. Incite the folks to violence and/or bigotry at your own risk of being criticized, at best, or indicted, at worst.

Subject to such limitations as may be imposed by statute, as interpreted by judicial review, you can pretty much say whatever you want. Words are, for the most part, harmless. That is not to say that they cannot educate, inspire or inflict pain or suffering, but most published speech is, as most informal conversation is, just blather, as it used to be called, not causing any real damage. The legal issue that arises most with published speech is when it is maliciously untruthful.

This brings me to the subject of the new phenomenon of internet comment in regard to customer reviews of business products and services. They are omnipresent now, and, for the most part, are indeed helpful, and appear factually accurate and informative, albeit based on individually diverse experience. Rarely can you buy through Amazon or go out to eat without at least skimming the starred comments shared by your fellow consumers. With consumer products, we all appreciate the input from fellow purchasers who have experienced the virtues or failings of what we contemplate buying.

While the usual layperson’s review of products seem to be an honest effort at unbiased reporting, I am not so sure when it comes to service industries and professions. Businesses in the so-called hospitality sector seem to really take some hard punches by disgruntled customers. Perhaps people are more inclined to demand treatment like royals or VIPs when they buy rooms or food than when they take a chance on an unknown product. In any event, reviews of board and room facilities can seem downright unforgiving and ill-willed. Some customers who apparently expect a flawless date night at what they hear is a top notch bistro, or weekend at a resort hotel, seem particularly venomous when their expectations are not rewarded. They will attack the waiter, the desk clerk, the housekeeper, their fellow patrons and/or their children, whoever causes their evening or vacation to be less than 4-5 stellar. In other words, they play the blame game to get even, or obtain therapeutic relief for a failed venture out of the house. Some folks seem to be particularly personal or mischievous in their reviews. They appear to derive some sensory pleasure in trashing the reputations of successful businesses. Not to be amateurishly psychological, perhaps it gives them a sense of power lacking in other facets of their lives, to shame an undeserving enterprise or establishment without good cause. I usually ignore these bad reviews, if most of others are uniformly favorable and supported by the so called expert critics. However, if all of the reviews of a business are bad, and they are legion, we would have what could be considered consensus, and perhaps its best to avoid patronage of that place. Mostly, blaming and shaming such as they are perceived, while not helpful, fall into that yelping or blather category, and a cost of doing business these days. I see some hospitality businesses rise to the challenge, and every allegation of substandard food, beverage or room receives a defensive reply, and usually a contrite apology, by someone on staff stuck with this unsavory exercise in customer relations.

I was unaware that professions such as medicine, law, and accounting had become susceptible to online customer/client/patient reviews until fairly recently. I am not in the vanguard of social media by any stretch, but when I first developed my law firm’s website, I googled and yelped others, and saw that I, as well as most, but not all, of my colleagues had client reviews. No longer does the public have to research their attorney’s rep or standing by consulting the local bar association or the stodgy and mysterious Martindale-Hubbell alphabetical rankings. Everything they might want to know about our profession as well as its practitioners is now on the internet. I look at that as a good thing, mostly and actually, although there is a whole lot of blather or yelping going on there as well. I have no doubt that most of the critical reviews of professionals are well-founded, and are honest impressions of how they were treated by the subjects or their assistants.

Where I tend to draw the red line on all free speech and published statements is factual inaccuracy. I have a problem with “fake news” and intentional falsity, no matter what the context. I make an allowance for professed or purported fiction, which I do not read anyway. But when I read a review or comment, I want to believe that it is based on the facts. If it is, and it is unfavorable, even if based on unreasonable expectations, or a desire to blame or shame, that is the way it goes in business. Be that as it may, as someone said, everyone is entitled to an opinion, but not their own facts.

Legally defamatory speech is different than blame or shame, as it impugns falsely and unjustly. If it is of a certain category, it can be considered either slander or libel “per se”. One of those categories is when such defamation falsely represents the facts about a person’s performance in their trade or following. As such, the defamation is actionable, and punitive damages recoverable. However, such lawsuits are rare, because of the certain expenses of litigation and the uncertain results in damage awards, or the ability to collect them.

I was blessed with sparse, but uniformly favorable reviews until very recently. I just happened to google my name and address when preparing for my move from Los Angeles to San Diego County. I happened on a google review by someone I will call “Mr. B.” Mr. B was not a client of mine. He was a beneficiary of a trust in which his sister, who was my client, acted as trustee. Mr. B’s comment about your author was that my office had “quick response but forgot important detail in trust account resulting in unnecessary delay”. Mr. B gave me 2 stars and thereby skewed my overall google standing as if I had struck out with the bases loaded.

I will not live or die according to my batting average at Google, and I have no intention of suing Mr. B for libel. I just react, as I say, when the facts are intentionally misrepresented. Breaking down his comment, I do appreciate that he thinks I am responsive, and that is true. That is what, in fact, I am doing here, to his next statement, i.e., that I forgot some unidentified important detail in a trust account that unnecessarily delayed something, again unspecified. I am not breaching any duty of confidentiality when I say that Mr. B is blatantly misrepresenting the cause of his displeasure. The trust accounting, such as it was, was entirely and adequately performed by the trustee prior to her distribution of the assets, and was approved by Mr. B and the other beneficiaries in advance of the mailing of distribution checks. Our office usually involves itself in physically making actual distribution to estate heirs by mailing checks to them via first class USPS. Mr. B was apparently in some hurry to receive his funds, so he asked us to send his check by overnight mail. I agreed to do so, but forgot, and it went out by USPS, as usual. This incensed Mr. B, and he let me know that he was “unhappy” by email. Of course, he left off the fact that he did receive the check by mail in short order, but his bank deemed it worthy of a hold for an additional delay. He blamed his Trustee sister for that delay, somehow. So, you see, Mr. B spreads a malicious word about my office, and the Trustee without any evidence to back it up, and he does so with impunity. There was, in fact, no important detail in the trust account that was forgotten and there were no unnecessary delays in him getting his legacy that were not contributed to, or caused by, his standing with his own bank. He has wrongly sullied my reputation, and I have the 1st amendment right to correct his misrepresentation of fact.

To the former clients who give me favorable reviews, I do appreciate their comments. I would even thank some who may deal out an unfavorable review in the future, as constructive criticism is welcome, and is constitutionally protected, anyway. What I will react to is shaming and blaming when it results in defaming. But it would take a blockbuster of a lie to get me to sue anybody. That is a road I have been on for 43 years, and it has come to its end.